When I was five years old I started gymnastics ( see my German homepage ),  later I trained youth teams, a bundesliga team and a students team in gymnastics and as such wie did competitions and training camps in Germany regularly. In 1972 we were given the honour by the Chancellor of the Federal Republic of Germany, Mr. Willy Brandt, who came to see my gymnast


From 1972 until now I have been involved in the promotion of sports in the so-called Third World, particularly in Africa. The following list of activities is supposed to certify most of my engagements.

1975 - In this year I was appointed by the German government as German project leader to establish the National Institute for Sports (NIS) in Lagos. Within 5 years the following measures have been done:

There were a lot more activities but not so important. However, it should be mentioned, that in some years I came 3 times to Lagos, but at least once, until 1994. 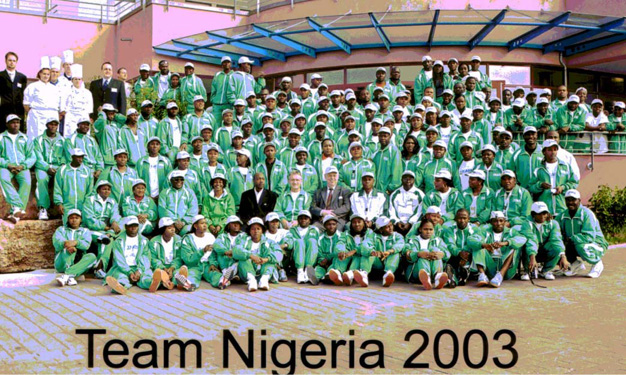 While I was in Nigeria at the Ministry of Youth and Sports Development to prepare all documents for the athletes to travel to Germany my counterparts, CEO  Mr. Rolf Dommer and his son Albert were  busy in Stuttgart to get in contact with hotels, sports organisations and coaches to run the training camp.

For reasons of evaluation I was invited to the Games at Abuja where I met some officials in the Games Village and  also the former Camp commandant  Alhaji  Abba Yola on the left and the Secretary General  ( SCSA ) Dr. Awoture Eleyae ( right ).

I am proud to announce that NIGERIA won for the first time the overall title of the best sports nation in Africa at the 8th All Africa Games in Abuja/ Nigeria and I am convinced that we have contributed immensly to these outstanding result!

Training Camp 2004
Preparation for the Olympic Games in Athen / Greece


With the great support of the community Schwieberdingen by Stuttgart we run again a training camp for  almost 200 participants. All relevant sports from Nigeria came to the camp and some could train in Germany for more than 6 weeks.

See some of them


There was need to coordinate competition in Germany and in Nigeria, e.g. All African Althletic Championship or the Football Match of the Nigerian women against the German National Team ( women ) in Offenbach/Germany

It should be known, that the Nigerian athletes belong to the best in the world, therefore we assigned the most succesful  former German National Coach to the team and they won at the Athens Olympics two times  “bronze”:

Nigeria was my favoured country but followed by Ghana as you can see by the next measures:

All these activities were bound on personal visits to Ghana by myself or my secretary General, Mr. Wilfried Bialik, and we also received many high ranking officers here in Germany.

The International Sports Academy has been an official partner of the International Military Sports Council for many years and my Secretary General was a member of the Partnership Commission. As such we also contributed financialwise to the courses of CISM by providing training and study materials.

In 1987 we organised a study tour in Germany for all Arabic Secretaries General in Football. Among them were Mr. Mustapha Fahmi (CAF) from Egypt and Mr. Peter Veleppan (AFC) from Malaysia and also the Arabic speaking Secretaries General from Africa, including Sudan.

As the President of the International Sports Academy I have been involved personally in all the above mentioned measures, by lecturing in the course or by doing the mangement for the trainig camps. Often I accompanied the top teams to the Commonwealth Games or Olympic Games.

It was a great pleasure and honour to meet many of the
popular sportsmen and -leaders and I gained a lot for my life.


Other activities in the World